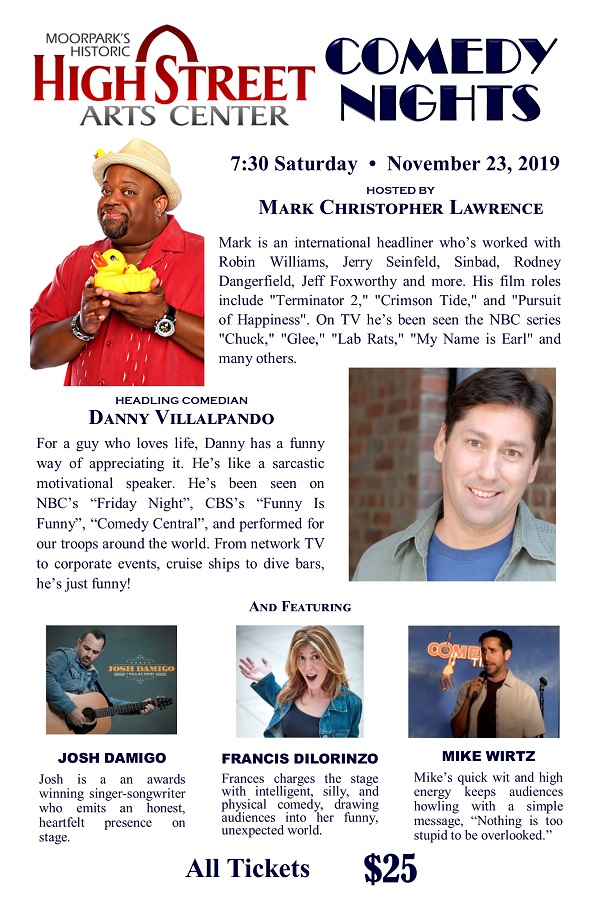 Don’t miss the Best Stand Up Comedy Show in Moorpark! Okay, we’re the only comedy show in Moorpark, but we can promise you a fun night out with professional comics who will keep you laughing.

Hosted by Mark Christopher Lawrence
Mark is an international headliner who’s worked with Robin Williams, Jerry Seinfeld, Sinbad, Rodney Dangerfield, Jeff Foxworthy and more. As a dramatic actor Mark has been seen in many unforgettable movies including “Terminator 2,” “Crimson Tide,” and “Pursuit of Happiness”. His television credits include the hit NBC series “Chuck,” “Glee,” “Lab Rats,” “My Name is Earl” and many others. Mark produces Comedy Shows across the country and brings the hottest names in comedy to Moorpark.

Danny Villalpando
For a guy who loves life, Danny has a funny way of appreciating it. He’s like a sarcastic motivational speaker. He’s been seen on NBC’s “Friday Night”, CBS’s “Funny Is Funny”, “Comedy Central”, and performed for our troops around the world. From network TV to corporate events, cruise ships to dive bars, he’s just funny!

Mike Wirtz
Mike’s quick wit and high energy keeps audiences howling with a simple message, “Nothing is too stupid to be overlooked.”

Josh Damigo
Josh is an awards winning singer-songwriter who emits an honest, heartfelt presence on stage.