Who is the Ghost of the High Street Arts Center?

A very special thank you to Makena Huey and Moorpark Acorn for featuring Zala and HSAC!

Who is the Ghost of High Street Arts Center!? 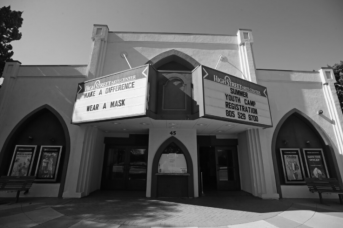 It is said that every theater has a ghost. If the stories are true, Moorpark’s High Street Arts Center is no exception.

“Are there ghosts there? I bet you dollars to doughnuts there are,” said Richard Senate, who has been ghost hunting in Ventura County for four decades. “There’s something going on in that place as there are in many theaters. This one goes back to 1927, so it’s got every reason to be haunted after all these years.”

Legend has it that a female ghost named Zala roams throughout the theater.

Moorpark resident Sandra Carlson has been ghost hunting for more than a decade. Her husband, Steve, was the former manager of the theater and he often received complaints from workers who witnessed Zala, whose name he saw spelled out on a Ouija board.

“She’s always been an urban legend for that theater,” Sandra Carlson said. “The workers kept saying how they would catch sight of a female in a long white dress.”

But she is more often heard than seen.

“We know she likes to sing,” Senate said. “They hear this beautiful voice singing.”

No one, however, has ever been able to make out the words.

Like most of the spirits that reportedly haunt theaters, Senate said, Zala is mischievous; she can be felt tugging on actors’ clothes as they clean up at night after plays.

While investigating the theater a few years ago, Carlson said several unexplainable things happened. In the light room overlooking the stage, she felt the temperature drop more than 20 degrees, her electromagnetic field meter “went crazy” and she caught a large orb on camera.

Patrick Duffy, the Art Center’s lighting director since 2010, said he is familiar with the stories about Zala but has never seen her himself.

“I know the Zala legend—there have been supposed sightings of her at the theater,” said Duffy, who has heard she makes herself known with the smell of roses and oranges. “Personally, I have never seen anything in the theater, and of all the people who work there, I have probably spent the most late nights there.”

What others may describe as Zala, Duffy described as a presence.

When he works late into the night, Duffy sometimes opts to sleep at the theater. That’s when he really notices the presence.

“There have been many times when I have been sleeping in my hammock and I can feel somebody watching me, but it’s not a malicious feeling,” he said.

There is one area of the theater that makes him feel uneasy: the staircase descending from the projection room. He can’t really explain why, though.

Despite numerous tales about Zala’s long, flowing gown, Senate and Duffy agreed that sightings of the ghost are much rarer.

“Everybody always says she’s a lady in white, but in the instances where people have said they have seen things …  it’s always been a dark shadow,” Duffy said. “There’s no way you could see a perfectly silhouetted shadow moving through a projection booth when it was lit.”

Both Carlson and Senate said they always do their best to debunk ghost stories.

“The first thing I do when I go to any haunted house is be skeptical,” Senate said. “You can’t just be a total believer.”

And they each have their own theories as to who Zala may have been.

“The legend goes that she was a Hungarian singer who was coming through the area and she was killed on the land that the theater stands on by a transient,” Carlson said.

She said she examined old newspapers from the early 1900s at the Simi Valley Public Library but never found an article that tied back to Zala.

“I’ve combed through all of those archives, and I’ve never come across a story about a murder in that area,” Carlson said. “Certainly that would have made the front page, but at any rate, it was a fun pursuit of the story.”

She also spoke to Lorine Willard, the woman who owned the theater from 1934 to 1961 and lived there with her daughters after her home burned down. Willard told her that she did not know about any paranormal activity at the theater and had never heard of anyone dying on the property.

It is Senate’s belief that actors are so dedicated to their roles that they create residual energy. Zala may have been a character, especially a gypsy character, that remained in the theater long after the actress moved on to a different part.

“After the play is over and all the people have gone home, this entity they created continues on,” Senate said. “Getting into your character gives it a life of its own.”

She may have also been an actress who died but did not want to say goodbye to the place she loved, Senate said.

“She could be coming back to once again tread the boards—that’s another commonly held theory about ghosts in theaters,” he said.

Although Carlson said “we tend to fear what we do not understand,” the two ghost hunters emphasized that spirits like Zala are usually harmless and sometimes even helpful.

“The most human thing you can do is see a ghost, oddly enough. Wherever there are people, there are reports of ghosts.” Senate said. “Fear is the last thing you should feel.”

Having heard stories about Zala for years, Duffy said he does not know what to believe.

As a self-proclaimed skeptic, he tends to believe that the rumors—that Zala was a homeless woman who was murdered in the area, or that she is the spirit of Willard, who often worked in the light and projection booths—arise because of the nature of theaters. They are often dark and filled with unusual noises, pranksters and unnoticed peers.

Most important of all, he said, theaters are filled with storytellers.

“The whole concept of theater itself is to tell stories,” he said. “I think most of the rumors come from the fact that we are storytellers.”