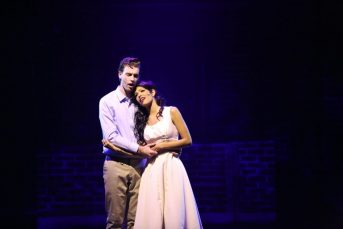 That phrase almost certainly popped up during rehearsals for “West Side Story,” the classic musical that ushers in the return of live theater to Moorpark’s High Street Arts Center. Jerome Robbins’ update of “Romeo and Juliet” continues to be relevant 65 years after its Broadway debut and remains a vital and important part of Broadway history.

High Street’s monthlong run of the show opened Oct. 15 before an enthusiastic, near-capacity audience, and performances continue through Nov. 14. The production captures the essential elements of the original, with a compelling scenic design representing a small patch of asphalt in a Manhattan ghetto, the site of an ongoing turf war between two gangs: the Jets, an all-white faction of local hoodlums, and the Sharks, a band of recent immigrants from Puerto Rico.

“West Side Story” is noteworthy for its scintillating dancing, and choreographer Susan Ingram and assistant choreographer Julie Hackett rise to the occasion with one exhilarating dance number after another. Highlights include the acrobatic Prologue; the jazzy, finger-snapping “Cool”; and the heat-induced mambo at the gym. One astonishing sequence during the “Somewhere” ballet features Maria’s dream double walking across the hands of the male ensemble members, as if she is floating on air. It’s a stunning display of grace and daring.

Amelia Camacho (Maria) and Jack Cleary (Tony) play the star-crossed lovers. Both are recent graduates of Cal State Northridge’s theater program but exhibit the talent and skills of seasoned performers, Cleary soaring on his solo “Maria” and Camacho showing off her operatic training on the lilting “I Feel Pretty.” Jeff Lawless makes a dynamic Riff, leader of the Jets, while Tyler Lopez brings experience to the part of Sharks leader Bernardo; he played the role in the 2018 production of the show at Conejo Players Theatre in Thousand Oaks.

As Bernardo’s girl Anita, Danielle Orjala is appropriately sultry and vivacious. One of the show’s highlights sees Orjala leading the Shark girls (Megan Ehrenberg, Melina Ortega and Aubree Facio) in a particularly torrid performance of the rhythmically demanding “America.”

Despite all the bravura dance numbers, the song that got the biggest ovation from the opening night audience was the show’s only comic number, “Gee, Officer Krupke,” in which the Jets satirize the urban squalor and discontent of their upbringing.

“West Side Story” has resisted the inevitable aging of older musicals from the 1950s thanks to its still-relevant representation of issues like anti-immigrant racism, gang violence and rape. The timeless love story that has been appropriated for film, television and stage since Shakespeare’s time remains central to the story, but takes a back seat to Leonard Bernstein’s memorable score and Stephen Sondheim’s lyrics.

Camacho and Cleary harmonize beautifully together, and although it’s hard to believe Cleary’s wispy Tony was ever a member of a street gang, it’s his boyish idealism that marks his performance.

For tickets to “West Side Story,” call (805) 529-8700 or go to highstreetartscenter.com. Guests must provide proof of vaccination or a recent negative COVID-19 test.