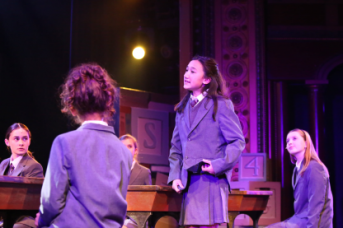 Roald Dahl’s children’s fantasy “Matilda” tells the story of a precocious 5-year-old English girl who uses a love for books and newly discovered telekinesis powers to wreak vengeance on the savage and sadistic grown-ups in her life. The musical version opened on Broadway in 2013, winning five Tony Awards, including best book of a musical.

The production onstage now at High Street Arts Center in Moorpark beautifully captures the show’s colorful characters while retaining both the sweetness and the propulsive exuberance of Tim Minchin’s bouncy score.

Not since “Oliver!” in 1960 have children dominated a Broadway musical as they do in “Matilda.” At High Street, Noelle Gibson and Bridget Hunzeker alternate in the lead role of the precocious schoolgirl. On opening night, it was Gibson’s turn, the young actress turning in a confident performance. She was a ball of energy with a crystal clear voice that easily carried the show.

“Matilda” pits children against an oppressive grown-up, in this case, the ferocious and sadistic headmistress Agatha Trunchbull, a variation on “Chitty’s” malevolent Child Catcher character. Trunchbull is traditionally played by a man in outrageous drag. In High Street’s production, that role is more than amply filled by Sean Burns, who is, in real life, a math and ASB teacher at Moorpark High School.

Trunchbull is a living nightmare, a grotesque mountain of hate who abhors children and revels in torturing misbehaving students by throwing them in the “chokey,” which we are told is a confining cupboard lined with nails and spikes. Burns is outfitted in a grotesquely protrusive outfit (designed by Raquel Karoly) that makes him appear hunchbacked and hunch-fronted at the same time.

Matilda’s muse is her sympathetic teacher, Miss Honey, played by Kristina Reyes, whose sweet voice graces songs like “This Little Girl” and, especially, the show’s signature song, “When I Grow Up.”

Michael Rosenblum plays Matilda’s abusive, self-centered father, Mr. Wormwood, a disreputable used car salesman, while Megan Rayzor plays Mrs. Wormwood, a would-be exotic dancer. Decked out in a fluorescent green suit, Rosenblum is given hair to match when Matilda spikes his hair oil with hydrogen peroxide. The highlight of his performance was the Act II opener, “All I Know,” a diatribe against books and reading.

On opening night, Rosenblum lost his wig after executing a double flip, but calmly retrieved it and put it back in place without skipping a beat, all to cheers from the audience.

In her featured number, “Loud,” Rayzor, as Mrs. Wormwood, mocks Matilda’s interest in books, advising her that being obnoxious works better in life (“You’ve got to highlight what you’ve got, even if what you’ve got is not a lot”). Joining her is her flamboyant dancing partner, Rudolpho, played by the elastic Ezra Eells, who executes one of his obligatory stage flips.

Samantha Netzen Bingham does a fine job as Mrs. Phelps, a sympathetic librarian who is captivated by Matilda’s story about an escapologist (Brian Mann) and his acrobat wife (Whitney Grubb). Max Baxter plays Matilda’s nitwitted, television-addicted brother, Michael. The large children’s ensemble is terrific in the remarkably complex and quirky dance numbers, choreographed by Amie Woolweber and Grubb.

There are some wonderful special effects, such as a self-writing illuminated blackboard and High Street’s customarily excellent lighting design by Patrick Duffy.

With its over-the-top characters and a frighteningly preposterous Miss Trunchbull, High Street’s production of “Matilda,” briskly directed by Tami Keaton with assistance from Shawn Adams Lanz, is a cautionary tale that reminds parents to listen to their kids and allow them to be who they were destined to be.