A very special thank you to the Moorpark Acorn for featuring Team High Street’s production of Moana Jr.

Get your tickets for our outdoor performances.  Now through August 1st! 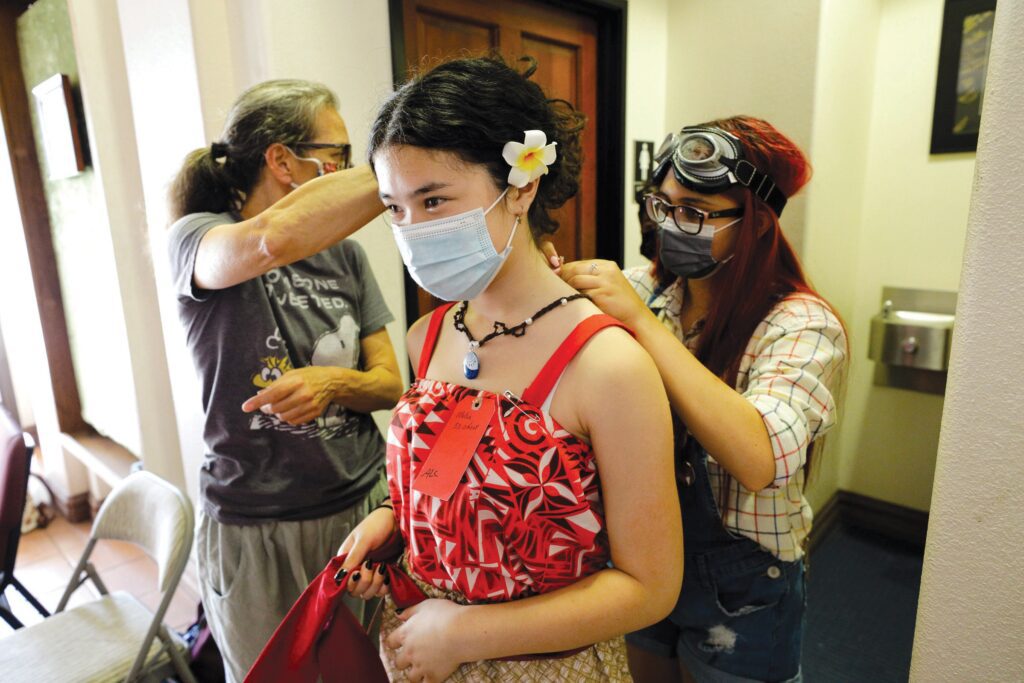 Sometimes the world seems against you. The journey may leave a scar. But scars can heal and reveal just where you are.

With the majestic ocean and lush hillsides of Motunui painted in the background, socially distanced children in High Street Arts Center’s summer youth camp sing these lyrics from the song “I Am Moana” under a white tent in the theater’s parking lot.

Many of these kids have loved the animated Disney film “Moana” since it was released in 2016, but now the pandemic has given the movie’s empowering message about self-identity and resilience new significance.

The kids are staging a 60-minute adaptation of the musical, titled “Moana Jr.,” outside at the arts center, 45 E. High Street, Moorpark. Performances take place at 6:30 p.m. Thursdays to Sundays through Aug. 1.

Since the Team High Street youth camp began June 14, staff at the arts center have dedicated themselves to creating a safe space for the return of the performing arts. 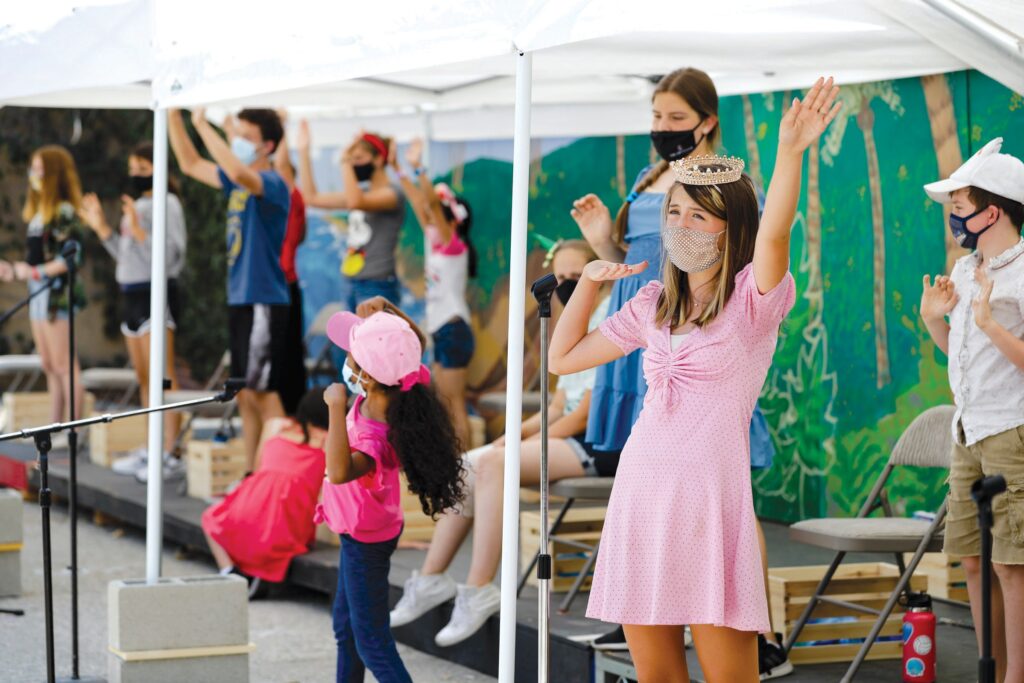 “One of the things I’ve constantly heard from our parents all summer long is how safe they feel bringing their kids here,” said Megan Rayzor, director of education. “Being able to provide community for these kids to be safe and to have fun and to bond with each other and to work together—that’s what I’m most proud of.”

The arts center staff has been planning this summer youth camp for nearly a year, compared to the typical four months of preparation.

The show doesn’t require a large cast, and Rayzor initially thought there wouldn’t be enough roles for everyone enrolled in the camp. But when the camp was broken up into four groups of 14 instead of the usual two groups of 40 due to the need for social distancing, she realized the musical’s theme would be particularly meaningful.

Mia Brown, one of the performers chosen to play Moana, said she has a newfound appreciation for exploring her identity and the world after months of uncertainty and isolation.

“From the message in ‘Moana,’ I think it’s important that people still go out, interact with people and do what makes them happy,” the 11-year-old said. “I want them to feel hopeful.”

Preparing for the show

Like the movie, the stage production is about a strong-willed girl named Moana. She lives on the fictional island of Motunui and must set sail across the Pacific to save her village and discover the truth about her heritage. It features songs by “Hamilton” creator Lin-Manuel Miranda.

The young performers in the show, who practice Mondays through Thursdays for three hours, made it clear that they do not want audience members to feel that the pandemic has hurt their performances. They also want to make sure that the contributions of everyone involved, from the costume designers to the set designers, gets noticed.

“I’d want (people) to know all the hard work that goes on behind the scenes,” said 13-year-old Madison Burns, who plays Sina, Moana’s mother. “I think people forget how much good actually goes into it.”

Staffers involved in running the camp are encouraging the community to support the kids and the production.

“One of the best things for a performer is to have a good audience, so just come out,” said Maya Godard, a 15-year-old junior camp counselor. “These kids have worked so hard, and I’m sure they’d be so happy to see anyone who can come.”

Director Andrew Nuñez, who has been involved with the camp program since 2017, emphasized that show will be enjoyable for everyone—even if you don’t know anyone in the cast.

“(The audience is) still going to enjoy how much heart that we’ve all put into it and how much fun that the kids are having because when they’re having fun, the audience has fun,” Nuñez said.

Rayzor wants every child in the cast, no matter what role they play, to learn about the importance of teamwork, which has become even more crucial over the past year.

“One of the things that I think we do a really good job of here at Team High Street is building the community and making it so that the kids feel safe in a non-pandemic year and in a pandemic year,” Rayzor said.

Building relationships with one another is one of the best parts of the camp experience, kids and counselors said.

“The community of the theater— having that group of people that is always there and I can always turn to—is just so special and so important,” said Maya, who considers her camp friends to be like family. “It’s unlike anything I’ve ever had.”

For children interested in expressing themselves through singing, dancing, and acting, the program gives them an ideal creative outlet.

“It’s a great place to find other people that share the same interests as you, and if you want to perform, this is the best way to do it because you’re not alone here,” said 14-year-old Melia Moss, who is also playing Moana during the run.

The performing arts have struggled to survive during the past year and a half, Maya said, and as a counselor, she’s seen how they’re now more important than ever.

“It’s so important to keep fostering kids with art and with music, especially after the last year when they’ve been so deprived of that,” Maya said. “It has been so great for the counselors to have that back and for the kids to have that back. It’s just been such a special experience.”

Over the past seven years, Maya said the program has helped her form her identity. Now, as a junior counselor, she hopes the program also has a lasting effect on other children.

Maya’s passion for the performing arts is directly related to her passion for helping children become more self-confident.

“I love getting to see the kids grow—especially after the past year in the pandemic,” Maya said. “I could tell at the beginning it was all very new for them, but getting to see them come out of their shells—because this is for a lot of them their first time doing things in person—is really awesome.”

Teaching the young performers about the theater is important to Nuñez, but he said his real priority is teaching them skills that they can apply in other areas of life.

“If they never set foot on the stage again, I want them to leave learning something about themselves,” Nuñez said.

“For me, the best part about camp is watching a kid off to the side or in the back row when they have their line saying it loud and proud and finding that inner strength,” Rayzor said. “I know our Moanas will be incredible, I know our Mauis will be hilarious, I know our Gramma Talas are going to pull at the heartstrings, but I’m really looking forward to those kids who get to shine.”